This former merchant’s house dating from the late 17th century, stands on the west side of King Street, on the corner of Ferry Lane. It is thought that an earlier building of similar plan stood on the same site, on land reclaimed from the River Great Ouse. In the early 17th century there were malthouses, brew-houses, warehousing and stables behind the main building, extending along Ferry Lane to the river.The present house has a frontage onto King Street with two long wings running back towards the river. It is likely that these originally formed two hall houses. By 1711 it had become a single dwelling which was settled in marriage on Charles Peast, a brewer and his wife, Elizabeth Greene, remaining in the family until the closing part of the 18th century.At about this time it was extensively altered and once again divided into two dwellings. It was probably at this time that the front elevation was refaced and raised to provide an apparent second storey. However, the original attic roof was retained with dormer windows connected to the new second floor windows at the front. The crow-stepped gables on the west elevation date from before the alterations. 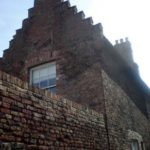 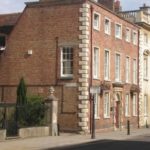 In the third quarter of the 20th century, the property fell into disrepair through prolonged vacancy, vandalism and theft. In 1986 the Trust commissioned a feasibility report on its repair and future use. Conversion to residential use was ruled out as it would have caused too much intrusion with new staircases, bathrooms, kitchens etc. Alternatively an office conversion presented problems in terms of fire and general circulation.
To overcome these problems, the architects suggested that the narrow court between the rear wings should be roofed over at second floor level. This has provided first floor galleried walkways and a new staircase, allowing the original Georgian structure to be seen and appreciated.Since the Trust acquired the building, extensive dry rot has been tackled, including the reconstruction of two staircases. Much panelling, windows and other early features have been saved, while unsightly windows in the west elevation have been replaced using original materials where possible.Despite generous grant assistance from English Heritage, the Trust made a loss on the project but has saved the last of the neglected properties in King Street. In 1992 a local firm of solicitors bought the building from the Trust for use as their own offices, renamed ‘Evershed House’ after Lady Evershed, the founder Chairman of the Trust.